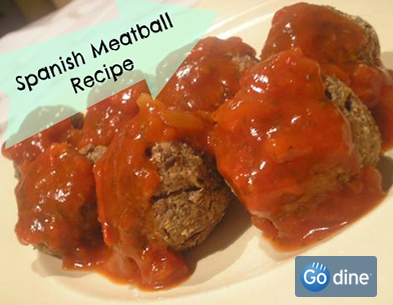 A classic Spanish tapas dish, meatballs in tomato sauce are easy enough to prepare at home. You can serve them as part of a tapas selection or just enjoy them as a lunch or supper dish, along with some crusty bread to mop up the sauce and some salad on the side.

This meatball recipe is quite simple without any hot spices, as you will find it in many authentic Spanish bars. However you can spice it up to your own taste by adding herbs or spices to the mix; try Spanish paprika, turmeric, thyme or cumin for a variation on the recipe (not all together though!).

With a pestle and mortar, or in a blender, crush two cloves of garlic, mix with the chopped parsley and a dash of white wine.

Put the beef mince in a bowl and mix well with the garlic mixture. Leave it to stand for the flavours to develop for 20 minutes or so. In the meantime soak the bread in the milk.

Squeeze the excess milk from the bread and crumble it into the beef mince. Add the beaten egg and a seasoning of salt and pepper then mix it all well.

Form the mixture into small balls. Sprinkle some flour on a plate and dust or roll each ball in the flour until lightly coated. Shake off the excess.

Fry the meatballs in olive oil until golden brown.

Drain them and place them in an oven-proof dish.

Chop the onion finely. Chop the remaining two cloves of garlic finely too. In a little of the oil left from cooking the meatballs, fry the onion and garlic until they soften. Add the chopped tomatoes and half a cup of white wine. Bring to boiling point and cook for about 5 minutes until it has formed a sauce.

Serve hot with plenty of fresh crusty bread to mop up the sauce.

Not feeling like cooking meatballs tonight after all? Eat out at one of Nottingham’s Spanish restaurants for plenty of delicious, authentic Spanish flavour.