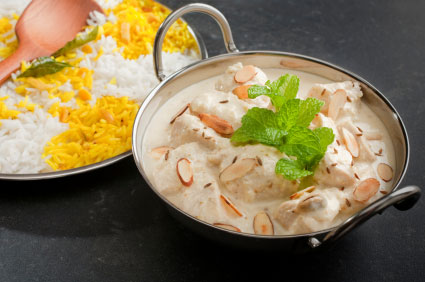 Rich and delicately spiced, chicken korma is a dish fit for kings. Not surprising since the pale creamy korma curry originated in the royal palaces of the Mogul dynasty. Korma relies on the fragrant spices like cardamom, cloves and coriander for its flavour, with far less of the fiery chilli, so is ideal for those who aren’t into hot curries.

The chicken is marinated in a yoghurt and spice mix for a few hours before cooking, which can easily be done in the morning before you go to work, if you want to cook chicken korma for your evening meal. You can make a richer version by substituting half of the yoghurt with cream when you really feel like spoiling yourself.

Remove skin from the chicken pieces. Finely chop the garlic and ginger or whiz it to a paste in the processor. Mix with the yoghurt and ground coriander and marinate the chicken for a minimum of 30 minutes, but preferably 3 hours or so. If you leave it for longer refrigerate it and allow it to come to room temperature again before cooking.

In a large non-stick pan, heat the oil or ghee and add the cinnamon, mace, cloves, peppercorns and cardamom pods. Stir them for half a minute and then add the chopped onion and whole green chilli. Season with salt. Cook stirring occasionally for six minutes until the onions are soft and golden.

Add the chicken with its marinade and the water to the pan. Bring to a boil and then cook covered at a gentle simmer for 25-35 minutes until the chicken is tender. If you use chicken breast instead of joints of chicken you can reduce the time. Check the pan every now and again, give it a stir and add a splash more water if it looks dry.

Add the almonds and coconut and stir them in well. Simmer uncovered for another 3 minutes until the sauce is nice and creamy. At the last minute stir in the garam masala and a pinch of sugar, check the seasoning then garnish with chopped fresh coriander. Serve with rice or naan bread.

Love chicken korma but want to eat out tonight? Why not try one of the fine Indian restaurants in Nottingham on a map.