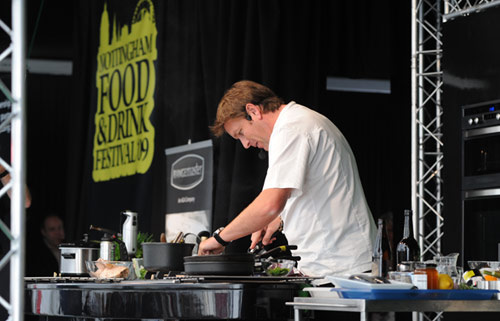 An action-packed 5-day event has been heralded a huge success for the city as over 18,000 visitors, attracted by the celebrity chefs’ theatre and the speciality local and regional food and drink market in the Market Square, attended the first ever Nottingham Food & Drink Festival this month.  Funded by the Nottingham Leisure Partnership, an organisation that represents the city centre licensees, and the Greater Nottinghamshire Partnership, the Festival took place from Wednesday 16th to Sunday 20th September to help showcase the city’s diverse offer of fine food and drink.

The new chief executive of the Nottingham Leisure Partnership, Sylvia Manser, commented: “We are delighted with the success of the first Food and Drink Festival.  Nottingham has one of the greatest variety of food and drink venues in the country and the festival felt like a real celebration of that.  It was fantastic to see so many people enjoying the wonderfully diverse programme of events that took place all over the city.”

The Rangemaster Chefs’ Theatre in the Market Square hosted celebrity chefs James Martin, host of Saturday Morning Kitchen, Nottingham’s own Michelin star chef, Sat Bains, Step Up To The Plate regular, James Tanner, Ready Steady Cook favourite Brian Turner and Something for the Weekend’s Simon Rimmer.  Tickets for James Martin’s first demonstration on the Wednesday morning went before midday on the day of release, proving what a popular draw he is.

James commented “it’s good to be back in Nottingham and I’m delighted that they’ve finally got their own food and drink festival, my last visit here was as a judge for the Nottingham Restaurant Awards.  It’s a great city and an event such as this continues to showcase the food and drink offering to its fullest.”

Another of the highlights in the Rangemaster Chefs’ Theatre over the five day festival, was the Ready Steady Cook style cook-offs with local chefs pairing up with radio, TV and sporting personalities.  BBC East Midlands Today’s Sara Blizzard took on BBC Radio Nottingham’s Richard Spurr in a contest that ultimately ended in a draw.  Lucky for Sara who didn’t seem to know her way around the kitchen too well and was found looking for butternut squash in a bottle!  They were followed by Heart 106 breakfast presenters Sam and Amy and Smooth Radio’s Mike Ashley and Tim Gough.  Assistant coach and captain of Nottingham Panthers, Bruce Richardson, who didn’t know what an aubergine was, took on the might of Nottingham Rugby’s Sam McDonald who had big shoes to fill as his father is a Michelin star chef!  The contestants were all guided through their challenges by chefs from venues around the city.

Coping with all this work were the festival’s unsung heroes in the prep kitchen, ably managed by Teresa Bovey and supported by students and apprentices from New College Nottingham who are studying the new Professional Chefs Diploma Programme – what a great opportunity for them.

Sunday 20th was family fun day with Sunday brunch, perfect sausage making and fun and easy bread making demonstrations on stage, plus interactive activities for children including cake decorating with Homemade and pizza topping with Strada.  The adjoining Smooth FM chill-out area also proved a popular retreat with deck chairs and parasols in the sunshine.

City centre restaurants and bars also held special events in-house making it a city wide event and attracting up to 100 customers at a time.  The events included a 7 course gourmet menu at Tonic, a beer and food matching event with expert Richard Fox at the Pitcher and Piano, cocktail making classes at The Living Room and a chocolate and beer tasting experience at Bluu.

Owner of The Curry Lounge Razak Arfan, who first approached the Nottingham Leisure Partnership with the idea two years ago, spoke of their involvement during the festival: “It was a fantastic experience, from cooking in the Chefs’ Theatre to showcasing the restaurant to new visitors during our week-long events. It was also nice to see my idea finally get off the ground. I’m sure it will grow to become one of Nottingham’s must-visit occasions! Great to see so many Nottingham folk supporting this unique event, there was a real buzz in the city. We were delighted with the response and look forward to next year.”

Craig Sharpe-Weir, manager of The Bell Inn, commented: “We held a ‘Best of British’ beer and food tasting on Friday evening, offering a few tasters from our menu with different beers, with Phil Darby from Nottingham Brewery co-presenting it with me.  The event was a great success, attracting around 50 customers.  Among these, there were a number of new faces who’d not been into the pub before, including some local CAMRA members who we’re keen to engage with as we’re proud of our cask beers.  And for the pub regulars, the event was a way of rewarding them, giving them another reason to come to the pub, and getting them to try something new.  The overall marketing of the Food & Drink Festival definitely created awareness of our event, especially as we’re so close to the Market Square – there was a great buzz about the place while it was on.”

Elsewhere, the regional speciality food and drink market in Market Square proved a huge hit with visitors, with a number of stalls selling out of produce and having to rapidly re-stock.

Stuart Isbister’s The Worm that Turned was one of the extremely popular stalls.  Stuart said “We thoroughly enjoyed participating the first Nottingham Food & Drink Festival and demonstrating our range of ‘grow your own’ seeds and accessories.  We met some interesting new people and I’m sure that after this strong start, the Festival will only get bigger and better in future years.  There’s loads to celebrate about our regional food and we look forward to playing our part.”

Pat Parkes, organiser of the event, summarised: “The Food and Drink Festival was a great initiative for the city centre restaurants and bars to lay on and is a great example of what can be achieved by businesses working together.  The festival attracted people from far and wide to enjoy what our wonderful city has to offer.  It was a fantastic event and it can only get bigger and better over the forthcoming years.”

Funding is already in place to make the Nottingham Food & Drink Festival an annual event for at least a further 2 years.