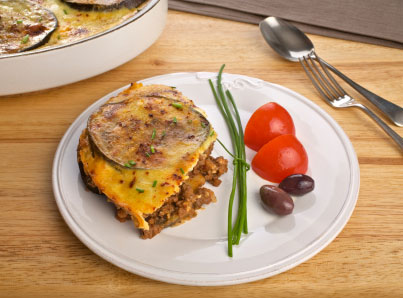 A classic Greek moussaka is a substantial, subtly spiced, layered bake of aubergines and minced beef topped with a creamy béchamel that fluffs up beautifully when baked. It takes a while to prepare, but is really worth it and you can always cook the meat the day before to make it easier.

The aubergines are an important part of the flavour of the finished dish, so make sure you use fresh and glossy skinned ones. Traditionally beef mince is most often used for moussaka in Greece but our British version frequently prefers lamb, so the choice is yours.

Trim the stems off the aubergines and wash them. Slice into ½ inch / 1cm slices lengthways. Stand them in a large bowl and sprinkle them liberally with salt on both side. Leave them for 30 minutes. The bitter juice should run out. Rinse them well and pat them dry on kitchen towel. Fry them in batches in the vegetable oil until they are golden brown on both sides. Drain them on kitchen towel to get rid of the excess oil.

Put two tablespoons of oil into a large pan and fry the onion over a medium heat until starting to soften. Add the minced meat and stir until it loses its raw red colour. Pour in the wine and let it bubble, then add the chopped tomatoes with just a little of their juice. Stir in the spices, bay leaf and oregano. Cook covered at a gentle simmer for 45 minutes, stirring occasionally. The liquid should all have been absorbed. If it hasn’t cook uncovered for another 15 minutes or until it looks fairly dry. At the end stir in 25g grated parmesan and the chopped parsley.

Put it all together

Serve with a salad and some crusty bread.

Want to eat moussaka without all this work?! Visit one of the Greek restaurants in Nottingham for authentic Greek cuisine.