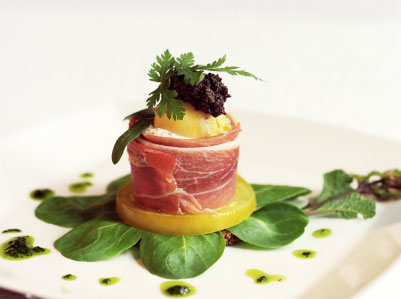 After the dire era of war-time food rationing it took a while for the British to overcome their reputation for food and regain pride in their traditional gastronomic roots. Elizabeth David was the forerunner of a new interest in good food, but she mostly looked to the country cooking of Europe for her inspiration.  The Sixties and Seventies were marked by an interest in the cuisines of other countries, ethnic eateries and bistros abounded. The Eighties heralded an era of nouvelle cuisine, again looking to France for guidance. There were already chefs starting to explore the traditional British food at that time, but the hearty dishes of old England didn’t sit well with the finicky presentation of nouvelle cuisine. When people tired at last of miniscule mouthfuls of artfully presented food, modern British cuisine finally began to establish itself as a force in the restaurant scene.

Modern British cuisine is not so much a revival of old dishes, but a re-interpretation, often with an element of fusion, taking the best of traditional stews, roasts, pies and puddings and re-inventing them. Succulent lamb shanks, juicy beef roasts, savoury pies celebrate the hearty dishes of yesteryear, but bring them into the new millennium with an imaginative twist. A new spice or herb, an imaginative accompaniment, unusual vegetables, all bring new interest to dishes that had been ruined for many of us by the old institution of school dinners. Steak and kidney pie, bubble and squeak, Lancashire hotpot, steamed puddings and their ilk have been rescued from the dreary catering trays of school kitchens and given new life with skilful cooking and interpretation.

The strength of British cuisine has always been in its fine ingredients: excellent beef and lamb, wonderful pork sausages and pies and a good variety of fish from the seas surrounding the island. The organic food movement and a return to slow food with its emphasis on humanely reared, quality meat, also went hand in hand with the success of modern British cuisine. The simple unfussy cooking of many dishes requires that the ingredients be as fresh and tasty as they can be. There are few sauces to disguise indifferent meat and a more informed public knows that locally sourced, organically produced food tastes better. Most restaurants that produce modern British cuisine will pride themselves on sourcing ingredients locally and cooking seasonally.

The label modern British doesn’t appeal to all chefs some of whom feel it restricts them, when all they want to do is use the best of all ingredients and take inspiration from other cuisines, whenever it feels right. When you get down to it though, modern British, really just means an emphasis on good, locally sourced ingredients, making use of regional specialities and using traditional British dishes as a starting point for a new gastronomic adventure. It means that we can finally take pride in our gastronomic heritage once more.